Home Sales are Up 27% from a Year Ago

For the fifth consecutive month, existing-home sales continued to be resilient in the face of the pandemic, climbing nearly 27% compared to a year ago, the National Association of REALTORS® reported Thursday.

Also reported this week, construction of single-family homes soared to the highest pace since the spring of 2007, as more buyers turned to the new-home market to find homes for sale.

Existing-home sales—completed transactions that include single-family homes, townhomes, condos, and co-ops--reached a seasonally-adjusted annual rate of 6.85 million in October, an increase of 4.3% from September. Total housing inventory continued to decline—down nearly 20% from a year ago—reaching a 1.42 million supply. That represents just a 2.5-month supply, a record low, at the current sales pace, NAR reports.

Listed homes are selling fast. Seventy-two percent of homes that sold in October were on the market for less than a month.

“The surge in sales in recent months has now offset the spring market losses,” Yun says. “With news that a COVID-19 vaccine will soon be available, and with mortgage rates projected to hover around 3% in 2021, I expect the market’s growth to continue into 2021.” Yun predicts that existing-home sales will increase by 10% to 6 million in 2021.

Meanwhile, new-home construction is also seeing an uptick in demand. Compared to September, single-family construction increased 6.4% in October to a 1.18 million seasonally adjusted annual rate, up 8.6% from a year ago, the Commerce Department reported Wednesday. The biggest gains for single-family and multifamily starts were in the Midwest, up 15.5% annually in October, followed by a 7.5% gain in the South and a 4.7% increase in the West. The only region to post a decrease in new-home construction last month was 6.4% annually in the Northeast.

“Faced with many uncertainties in 2020, the real estate industry has been able to meet surprisingly strong home buying demand and help lead our country’s economic recovery,” says NAR President Charlie Oppler. “As we continue to help consumers secure housing and property, we will also remain vigilant in working to expand housing options, equality, and affordability for all who are entering the marketplace.”

All four major regions of the U.S. reported month-over-month and annual gains. The Midwest saw the greatest monthly increases. But median home prices increased at double-digit rates in each of the four major regions compared a year ago. Here’s a breakdown of home sales from across the country in October:

Stay up to date on the latest real estate trends, valuable tips, and company news. 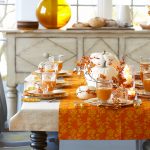 What Real Estate has to be Grateful for in 2020 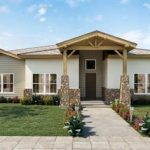 15 Cities with the Lowest Costs of Living 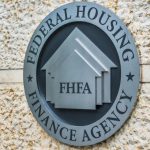 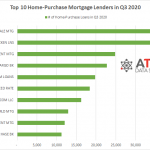 10 Mortgage Lenders with the Highest Volume 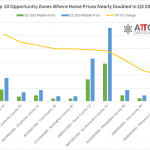